Bionic penguins take to the water – and the skies 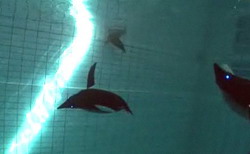 Bionic penguins take to the water – and the skies

The graceful robotic penguins in the video above were unveiled by German engineering firm Festo this week.

Using their flippers, the mechanical penguins can paddle through water just like real ones, while larger helium-filled designs can “swim“ through the air. The penguins are on show at the Hannover Messe Trade Exhibition in Germany.

Each penguin carries 3D sonar developed by EvoLogics in Berlin, Germany, which is used to monitor its surroundings and avoid collisions with walls or other penguins.